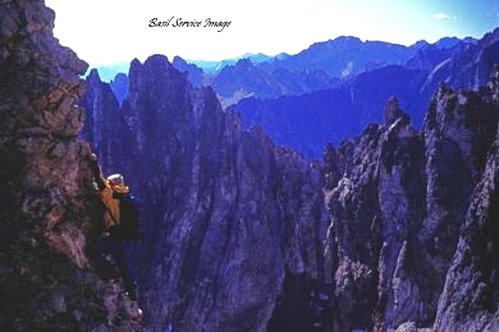 At the turn of the 19th century when President Thomas Jefferson’s talented explorers Meriwether Lewis and William Clark crossed over Montana’s Beaverhead Range into what would eventually become central Idaho, their westward sojourn toward the Pacific came to an abrupt halt. What impeded their advance was a sea of mountains that in the words of Lewis “seemed to span the horizon and beyond.” Central Idaho is truly a mountainous monstrosity covering a region larger than the entire country of Switzerland with over 120 individual mountain ranges, more than 400 summits topping 10,000 feet, and elevation vertical gains exceeding 6,000 feet and more. In comparison, the state of Colorado boasts a meager 38 individual ranges. So remote are Idaho’s central regions that not until the early 1920s did a road even exist that connected its northern extremities to its south. And not until 1938 was it even paved. Even so, today anyone serious about reaching Idaho’s north from its southerly provinces will travel through Montana. More remarkable is its highest point, Mount Borah, which was not discovered until the late 1920s, and its highest elevations were not even explored until the early 1960s. During this period, more was known of the Himalayan peaks of Asia than of Idaho’s central corridor. Today, Idaho’s mighty heaping central dominion predominantly lies as it did when it defeated America’s first explorers, an untouched pristine, and spectacular mountain climber’s Mecca of eternal peaks and pinnacles. Over 90 percent of Idaho’s central regions are comprised of federal lands and wilderness — lands set aside by President Theodore Roosevelt at the turn of the 20th century to be preserved, as is, for generations to follow. However, Idaho’s indoctrination as the “wilderness state” didn’t come into being through political measures, but through its geographical forbinden surrondings. Inaccessible high-reaching mountains descend precipitously towards deeply carved prohibitive canyons banning access, in some circumstances, for 100-mile reaches. It is this inaccessibility that has preserved Idaho’s central interior, and its “sea of mountains” that will safeguard its future.

Comments or questions are welcome. Fill out the CAPTCHA area below to prove you are human