I have contributed to over 25 Fishing Publications and have visited over 1,200 Lakes and Streams in my 40 years of  travel  through Central Idaho’s more remote reaches. Few if any know central Idaho’s fishing regions better. 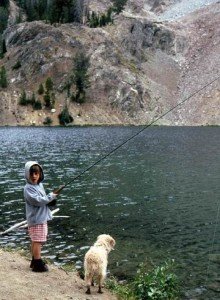 When Thomas Jefferson’s talented private secretary, Meriwether Lewis, and Lewis’s second-in-command, William Clark, reached the western fringe of what is now the Montana/Idaho border, they were confronted with an impenetrable wall of enormous snow-capped heights that forced an abrupt detour of their westward journey towards the Pacific.  Searching for a way through these peaks, the explorers eventually crossed over the Beaverhead Range from Montana to Lemhi Pass and became the first white men to enter central Idaho’s most eastern perimeters.  Here Lewis and Clark were again expelled from their Pacific ambitions by even higher mountains whose omnipotent summits only multiplied into west-trending oceans of serrated white-capped obstructions that appeared to span the horizon and beyond.

Hearing of a river, Idaho’s Salmon River, which the Indians claimed, had carved a path through this daunting sea of summits; Lewis and Clark hoped to ride its untested waters through what is today Central Idaho.  However after a short reconnaissance of the river’s treacherous rapids, Lewis quickly proclaimed it un-navigable and sought another course to the Pacific.  What Thomas Jefferson’s heralded explorers failed to negotiate back in 1804 was the largest uninterrupted expanse of mountains and, to date, most extensive wilderness/road-less area in the United States, excluding Alaska.  Currently, central Idaho’s highlands, which cover a region larger than the entire country of Switzerland, remain a vast monstrosity of awe-inspiring, trout laden cirque-lake and mountain stream Shangri-las that are, with only a few exceptions, as wild and intimidating as when they defeated America’s first explorers. 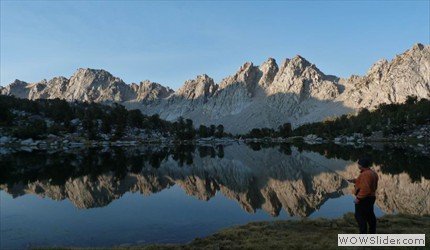 General tips for fishing Idaho’s Alpine Empire.  First, high mountain lakes and streams tend to be poor natural producers of trout, with exceptions, due to the lack of adequate spawn able tributary flows.  An exception to this rule is aquatic environments that contain Brook Trout.  Brookies tend to be prolific breeders, having the ability to spawn in oxygen-depleted streams or lakes, and are seldom restocked in the upland regions by the Idaho Fish and Game.  So, when fishing the highlands of Central Idaho, take some time to observe the finned tenants.  Fish that ate small and high in numbers with large heads in proportion to their bodies indicate a population outstripping the food supply.  Keeping a few can actually assist in depleting an overcrowded situation.  Aquatic environments that contain small populations of larger fish—in most cases the species are rainbows, goldens or cutthroats—and reveal inadequate spawning flows can indicate lack of natural reproduction.  Replenishment of such lakes and streams depends almost entirely on stocking by humans sources, and keeping fish can sometimes have serious consequences on an already small population base.  The use of barb-less hooks, along with prudent catch-and-release techniques, are a must in environments lacking natural reproduction.  If possible, never remove a fish you intend on releasing from the water, and have as little hand contact as possible.  If you must touch the fish or remove it from the water, wet your hands first.  Never touch a fish with  dry hands.  For tips on how to catch Central Idaho Trout, and where to go, write me a note.

{This email is obscured. Your must have javascript enabled to see it}

Comments or questions are welcome. Fill out the CAPTCHA area below to prove you are human